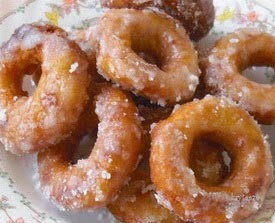 HOW TO MAKE :
1. Grate the cassava, then squeeze the grated candy potato utilizing gauze to take away the bitter style. Add the flour, salt, and stir till effectively mixed.
2. Spherical it into small items and make a gap within the center in order that it resembles a bracelet.
3. Warmth the oil in a frying pan. Fry the donuts till cooked and golden brown. Take away, drain and funky.
4. Warmth the sugar with water till it thickens. Put the fried bracelet cake into the sugar glaze and stir till evenly coated.