The substances wanted to make this coconut pearl cake are fairly easy, in addition to the best way the cake is made which is comparatively easy. This cake will be served at numerous household gatherings or as a snack within the afternoon. 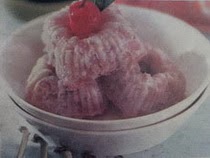 HOW TO MAKE :
1. Boil water, boil sago pearls till delicate. Elevate, drain.
2. Combine sago pearls with grated coconut, sugar, salt, vanilla, pandan leaves, and sago flour, combine nicely.
3. Put together the putu ayu mould, fill the coconut pearl sago into the mould till it’s full, put aside.
4. Warmth the steamer pan, steam the pearl sago till cooked, take away and let cool. Take away from the mould. Serve after chilling.