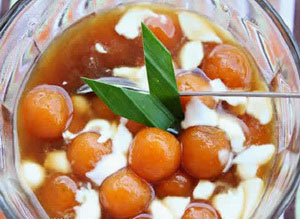 HOW TO MAKE :
1. For Candil: Stir glutinous rice flour, water, and salt till easy, then type a ball the scale of a clam, put aside.
2. For Porridge: Boil water with brown sugar and pandan leaves till it boils. Take away, then pressure and convey to a boil once more.
3. Enter the balls of Candil, boil till they float. When every little thing floats, add the rice flour answer. Stir till it boils and thickens, take away from warmth.
4. For the Coconut Milk Sauce: Boil all substances till boiling, take away from warmth. Serve the candil porridge with coconut milk.